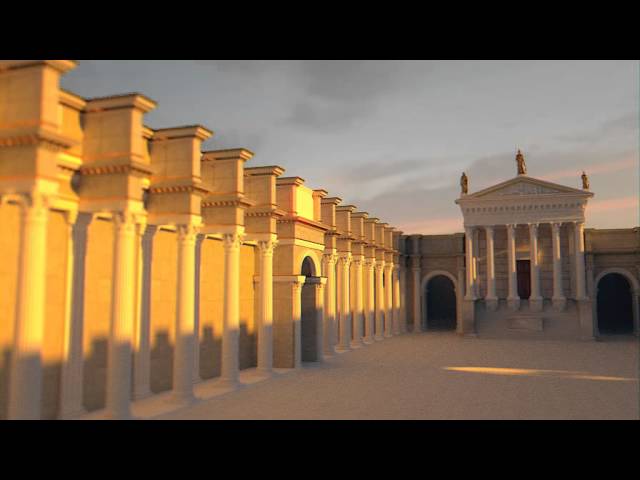 Let’s start by saying that the Forum of Nerva, in reality, was not built by Nerva. Confused? Let me explain. The Roman Forum was the heart of the political-social life of Ancient Rome. At the end of the Republic, what was once a small town among the many in central Italy had quickly become a metropolis, the capital of a boundless territory in continuous expansion. The constant influx of prisoners, slaves, merchants, traders, artists in search of money or simple citizens in search of fortune had led to an exponential increase in population. Julius Caesar, who in addition to being a great general was a shrewd politician, saw in the possibility of linking his name to the forum a great opportunity for his propaganda. Taking advantage of the necessary restoration of the Curia, destroyed during the civil war, he built a new large square behind it with a temple dedicated to Venus, mother of Aeneas and thus mother of Caesar himself and of all the gens Iulia.
Augustus, who in terms of propaganda even exceeded his divine father, decided to dedicate another forum with the same aim. Here the message became even more explicit: at the end of two parallel arcades decorated with statues of the great Romans and of the most eminent members of his gens, he built the temple of Mars Ultor, the god who had avenged Caesar and the Romans defeated in Teutoburg and Canne. Moreover, since it had to be clear to whom such greatness was owed, he added a room with a statue of the emperor 12 m high.
Vespasian did not want to create a new Forum, but only to build the largest number of public buildings on the land just freed from the bulky Domus Aurea of Nero. Together with his son Titus, he transformed the entire area into a large quarter in which the Colosseum, the Baths, the Arch of Titus and the Temple of Peace were completed in record time. Peace returned to Rome after the Military Anarchy, peace returned to the East with the taking of Jerusalem. He built a large temple with a beautiful square, decorated with fountains and large flowerbeds, with precious marbles and a magnificent map of the city carved in marble.
Domitian, Vespasian’s second son, who succeeded his brother who died prematurely (or was killed), continued the work. He built the basement of the Colosseum and decided to build a new forum. The problem was the space, since the area between the Suburra and the Velia was completely saturated. From a political point of view the expropriation of the houses of the poor people was not a good idea, so contented himself with the little space left free, a strip of land along the Argileto which led from the Suburra to the Roman forum. Its forum was narrow and long, a corridor rather than a square, so narrow that it was not even possible to make a real porch, since the columns were leaning directly against the wall. A temple was dedicated to Minerva, the goddess who on several occasions had taken him out trouble. Perhaps the goddess did not like that solution, or perhaps his wife Domizia did not forgive him for too many shameless betrayals, the fact is that Domitian was killed by a conspiracy.
The elderly Nerva become emperor, with a beautiful forum which was only missing the ribbon of the inauguration to be cut. That’s why Domitian’s forum is called Nerva’s. The construction of Via dell’Impero ended up cutting the perimeter of this forum in two. Here we can find remains of Carolingian houses that were built in the Middle Ages near the wall of the forum, which provided protection and useful building material. To get an idea of how they should be, you can find a plaster model at the National Museum of Crypta Balbi. Undoubtedly, however, the best preserved part is that towards the Suburra. It’s a pity that, at the beginning of the seventeenth century, Pope Paul V dismantled what remained of the temple of Minerva to build the Acqua Paola fountain on the Janiculum hill.