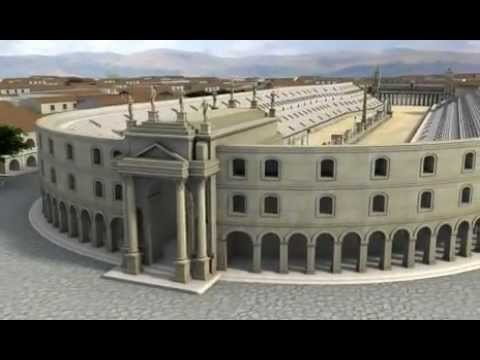 It was the largest building ever devoted to shows. Its construction lasted for several centuries. The first configuration was that of a racetrack, in the Vallis Murcia, between the Palatine and Aventine hills, and was built at the behest of the first Etruscan king of Rome, Tarquinius Priscus. This building might have been the scene of the legendary rape of the Sabines. The structure was made of wood. The first carceres masonry date back to 174 BC; in the same period the seven eggs that were used to count the number of laps were positioned. In 33 BC Agrippa added seven bronze dolphins. Augustus built the pulvinar, a sacred area reserved for the gods, built on the side facing the Palatine hill. Main innovation was, in 10 BC, the addiction of the Obelisk of Ramses II, carried from Heliopolis and nowadays located in Piazza del Popolo. In 357 it was joined by the obelisk of Thutmose III, from Thebes, the highest of Rome (32.50 meters), set in 1587 in Piazza San Giovanni in Laterano. During the Augustan Age, the capacity of the circus was about 150,000 spectators. Over the centuries the circus suffered several destructions and many renovations; in 64 BC the famous fire that destroyed the large part of Rome started right from the Circus Maximus. Reconstruction by Nero increased its capacity to about 250,000 spectators. Under Domitian there was a new destruction and the reconstruction was completed by Traiano; the bend between Palatine and Celio hills, still visible nowadays, dates back to that period. Restoration work continued until the fourth century AD, and the capacity was then calculated as 385,000 spectators (reserves exist, however, on this number).