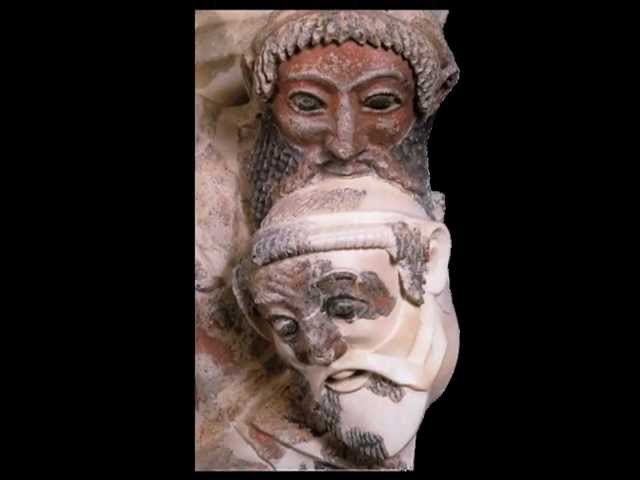 One of the most interesting places of the Etruscan world is Pyrgi, one of the ports of the ancient Caere (Cerveteri), located near the village of Santa Severa (50 km north of Rome). Plundered in 384 BC by Dionysius of Syracuse, Pyrgi has been for more than forty years the object of studies and archaeological investigations that led to the discovery of an exceptional epigraphic document: the gold plates of Thefarie Velianas. The sanctuary consists of two different temples, built along the coast in an area of ​​approximately 6 hectares (partly made ​​with an artificial embankment), in about fifty years. Impressive decorations emphasized the monumentality of the sacred place. The first temple to be built was the so-called Temple B, with the near area C (devoted to the cult of the chthonic deities) and the so-called Twenty Cells, located along the southern side of the sacred perimeter. As indicated by the gold plates already mentioned, the edification of these monuments should be attributed to Thefarie Velianas, who in a bilingual text (Etruscan and Phoenician) defined himself “king of Caere”, dedicating the temple to Uni (Juno)-Astarte.
The edification of the so-called Temple A dates back to the mid-fifth century BC, about fifty years after the construction of the first temple. Temple A was dedicated to Leucothea-Ilizia. In the Museum of Villa Giulia in Rome it is possible to admire the beautiful high relief depicting the grisly scene taken from the Seven against Thebes in which Tydeus, inspirer of Dante’s Ugolino devours the skull of his opponent Melanippo. Worth a visit the beautiful rooms of the Museum of Villa Giulia in Rome dedicated to the sacred complex, as well as the museum housed in the rooms of the Castle of Santa Severa, dedicated to the nearby archaeological site and to the theme of navigation in the ancient world (www.museosantasevera.it)