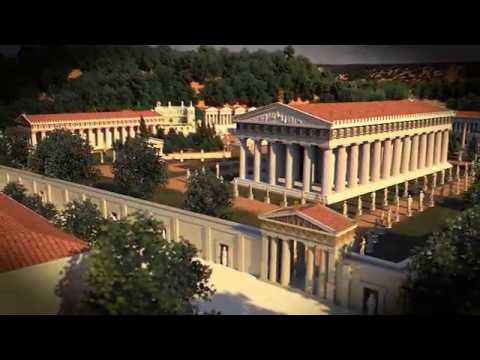 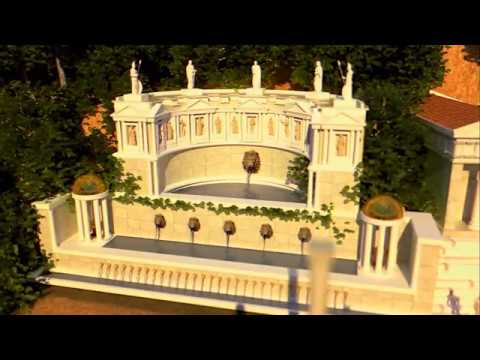 Olympia was the centre of worship of Zeus, the father of the twelve Olympian gods. Some of the most remarkable works of art were created to adorn the Altis, the sacred grove and sanctuary. Great artists, such as Pheidias, put stamps of inspiration and creativity here, offering unique artistic creations to the world. Μany masterpieces have survived: large votive archaic bronzes, pedimental sculptures and metopes from the temple of Zeus, and the famous complex of Hermes by Praxiteles. These are all key references in the history of art.
Still visible inside the peribolos (enclosed court) of the Altis are the shrines to the gods, the principal temples of Zeus and Hera, and the remains of some very ancient sanctuaries, such as the Pelopion and a row of Treasuries to the north, at the foot of the Kronion hill. The divine precinct is packed with history and importance. There are structures used by the priests (Theokoleon), the administration (Bouleuterion), state (Prytaneion), and accommodation (Leonidaion and Roman hostel) buildings.
Some other buildings were used as a home by the athletes who participated in the games, called the Olympic games, which took place every four years in honour of Zeus. Stepping into the stadium, you can still imagine the roar of the crowd. This is the same track where athletes raced for glory millennia ago. The remains of dozens of buildings and temples sit among the shade of trees on the archaeological site.
Initially, games were likely to be played in a single day with only the stadium race competition. In the following years more competitive specialties were added: long jump, javelin throw, discus throw, pancrazio, numerous racing events, chariot races etc. The Olympics were not the only sporting event of antiquity, there were other Panhellenic games in Delphi , Corinth and Nemea . The award ceremony took place with an olive branch or a laurel wreath, and the athlete had glory and honour.